A special video tape is projected on the "screen" by a dedicated projector. Water curtain movie .When the audience is watching the movie, the fan-shaped water curtain merges with the natural night sky. When the characters enter and exit the screen, it seems that the characters take off to the sky or descend from the sky, creating a sense of emptiness and dreaminess, which is fascinating. The water screen movie projector is composed of mechanical device, control bracket, communication port, software, time signal interface and DMX512 interface. The projector's engine is controlled by optical sensors with high precision. There are three control methods: programming control, direct control and utility control. The water curtain is more than 20 meters high and 30-50 meters wide. Various VCD discs or special films for the water curtain can be played on the water curtain. The film and television effects are peculiar, novel and an excellent advertising tool. Various squares and open spaces Water curtain film can be installed on the water surface. The water curtain is usually more than 20 meters high and 30-60 meters wide. The screen of the water curtain movie has a strong sense of three-dimensionality and space. The characters seem to soar into the sky or fall from the sky, and merge with the natural night sky. This kind of illusory and dreamy feeling, coupled with laser patterns, makes the scene more magnificent and magnificent. Water curtain movies are suitable for major festivals, large squares, and theme parks.

The novel and peculiar form of laser water curtain has been increasingly applied to man-made landscapes and environmental engineering. Its appearance has not only attracted the attention and appreciation of people at all levels, but has also become a brand new creation for environmental designers and the media. , Tools and means for audiovisual landscape design with strong shocking power. 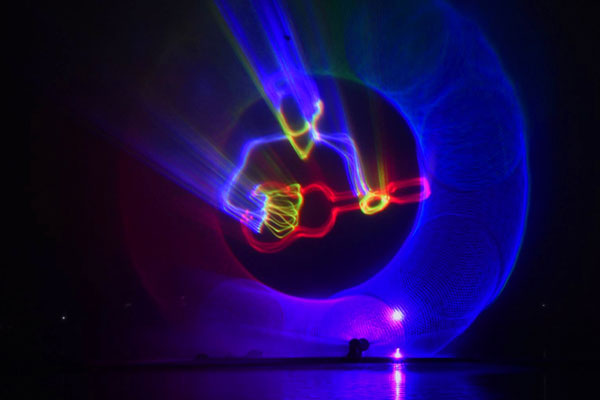 Water curtain technology appeared in the 1980s, when it was only owned by large cities in several countries such as France and Japan. The water curtain uses a high-power submersible pump to spray water in a fan of a specific shape at a very high water pressure to form a transparent three-dimensional water film with a certain spatial thickness. Therefore, when it is used as a projection surface, there will be a special optical effect. The visual penetrability of the screen can make the picture have a illusory three-dimensional feeling, making people feel in a strong, immersive The fantasy mood.

Water curtain laser show system is a set of multimedia performance system with excellent shape, sound and color by projecting the animation pattern formed by the laser beam emitted by the laser on the water film sprayed by the water curtain nozzle, with an audio system. The laser beam is controlled by a computer program compiled by the laser control system, which can emit a variety of colorful animated graphics at will according to the customer's requirements, and irradiate it on the crystal clear water film to form a dazzling and strange effect. When the audience is watching the movie, the fan-shaped water curtain merges with the natural night sky, and the content of the movie is like floating in the air. When the characters and objects in the animation enter and exit the screen, it is completely a three-dimensional feeling, as if they are flying into the sky or falling from the sky, creating a feeling of emptiness and dreaminess, which is fascinating.

The physics of the laser itself determines that it has the characteristics of high brightness, bright colors, long projection distance, and good molding effect. When the colorful, magnificent and colorful laser animation graphics that it outlines are projected on the water curtain, due to the scattering of water drops , So that the entire water curtain presents a variety of text, graphics, and light beams, and the program is varied, magnificent and spectacular.

1.The principle of water curtain projection 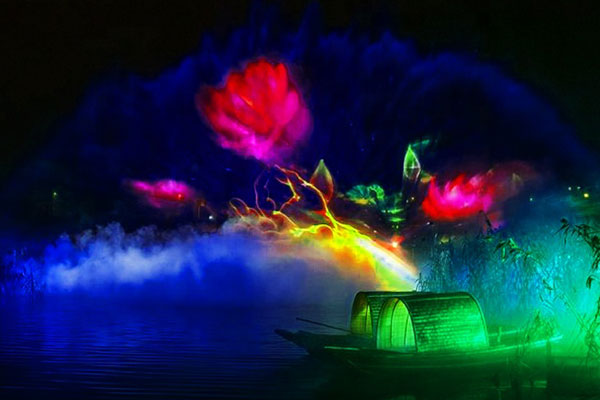 The imaging factor of water curtain projection lies in the use of the particularity of "water" and projector equipment with special requirements for lumens, light sources, and light beams. When the water body enters the generator, it first undergoes a laminar flow treatment, and then reverses the vortex flow treatment to enter the water separator, and then the ejector performs a second aeration treatment on each water separator, and its water outlet is double Layer ring, the diameter of the water is 1 mm, the inner ring adds the water body to the air according to the jet flow principle, so that the waterline wraps the air and falls to form a combination of prerequisites for transparency and imaging, which is the key to the water curtain projection! It can also be said that water curtain projection uses the imaging principle of a mirage to present light and shadow images with the help of particles existing in the water.

The simpler useful pool planes include rectangular vertical planes, irregular vertical planes, and 360-degree circular three-dimensional ones. Water curtain projection can be freely customized according to customer needs and site characteristics. A water curtain projection feast was staged at the Japan Kabuki Festival in Las Vegas in 2016. Created by Shochiku and teamlab. In the interesting interactive part, the audience can use their mobile phones to catch fish on the water curtain.This work was named "Periscopista", which means "a tribute to human curiosity and instinct", allowing participants to control the emotions of the scene and encouraging them to collaborate to create beautiful visual effects.In addition to actions and sounds, shouting to the "horn" on the installation, the water curtain will also change with the sound, giving the audience a full sensory experience.

Generally, small water curtains are close to 10 meters in length and width, with an area of about 100 square meters; large lake water curtains can be more than 150 meters in length and 30 meters in height, and their night-view effect is even greater than that of urban landmarks. Distinct. The water curtain can also be adapted to local conditions, such as local waterfalls, water curtains, etc.Dubai Festival City held a world's largest water screen projection show, about a young boy composing his magical journey through fictional things such as airplanes, whales, tree houses and dancing robots. 12 projectors of the same type are used to create a beautiful bay water curtain. 6 water curtains together form a seamless giant screen 68 meters wide and 13 meters high, with a total area of 892 square meters.

Shocking visual impact.The water is colorless and transparent, casting a three-dimensional picture. In the sultry night, the unpredictable light and shadow combined with music and sound effects form a mirage-like scene, allowing the audience to experience the mysterious wonderland and generate unlimited daydreams.To commemorate the 61st Japanese Horse Racing Championship Arima Kinen, the creative team produced a water screen projection work called "Beyond the Dream". When night fell, a silver-white horse leaped forward, graceful and vigorous, as if with the dazzling light of the stars.Suddenly, the galloping horses began to burn, and they turned into many tall and mighty fire horses. These fire horses ran back and forth on the lake. The tall horses and the flying flames became the most beautiful scenery on the lake.

Wide audience.It can be viewed not only up close, but also far away. Of course, depending on the viewing position and angle, the effect will vary greatly, such as looking at a lake, looking at a nearby tall building, in the distance or aerial photography.Incorporating a rich creative series of theme content into the water medium, combining naked-eye 3D animation special effects, light and shadow interaction with live music and dance performances with national cultural cha Compared with traditional flat projection display methods, today's multimedia projection display methods are more diverse, and the image effects are more brilliant and easier to attract people's attention. The shocking visual impact of the water screen projection, combined with the super-powered sound effect, the unpredictable laser beam, like a mirage-like scene, allows the audience near the scene to experience the mysterious and fantasy wonderland.

Compared with traditional flat projection display methods, today's multimedia projection display methods are more diverse, and the image effects are more brilliant and easier to attract people's attention. The shocking visual impact of the water screen projection, combined with the super-powered sound effect, the unpredictable laser beam, like a mirage-like scene, allows the audience near the scene to experience the mysterious and fantasy wonderland. 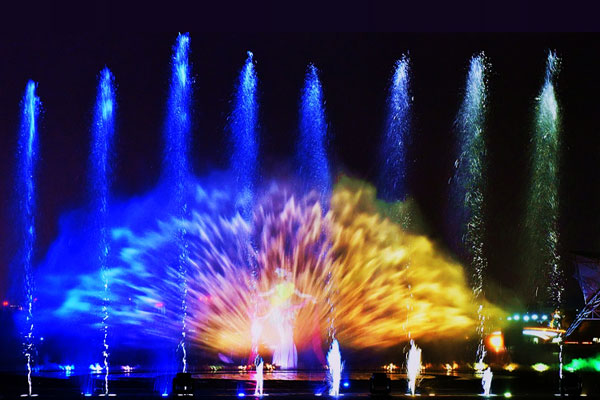