The musical fountain reflects the connotation of music and the theme of music through the ever-changing fountain shape, combined with colorful lighting. A good musical fountain, the change of water shape should be able to fully express the music. A music control system is added on the basis of program control of the fountain. The computer decodes and encodes audio and MIDI signals, and finally outputs the signal to the control system to keep the fountain’s shape and lighting changes synchronized with the music , So as to achieve the perfect combination of the fountain water type, lighting and color changes and the music mood, making the fountain performance more vivid and rich in content and embodying the art of water. Music fountain: it can change according to the ups and downs of music. Users can write their favorite music programs in the editing interface. The playback system can achieve a unified atmosphere of music, water, and lighting, and playback synchronization. 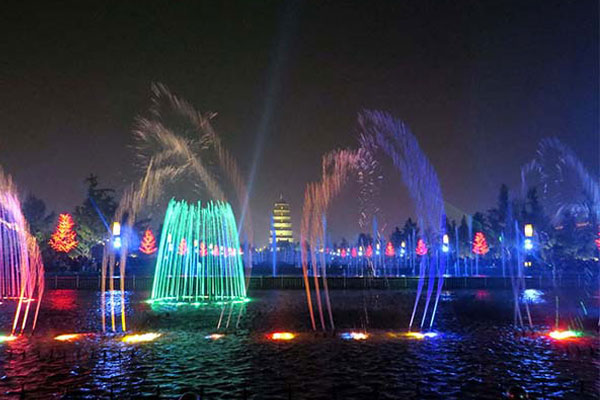 To put it simply, the principle of the music fountain: In fact, the audio signal is converted into an electric frequency signal. The electric frequency signal is controlled by a frequency converter to make the pressure of the pump change with the rhythm of the music. The water column is controlled according to the played music to achieve the effect of synchronization with the music. The water column is controlled by a water pump, and the water pump is composed of a three-phase asynchronous motor. If the speed of the three-phase asynchronous motor is connected to the power frequency power supply, the speed is Without change, the frequency converter is a device specially designed for motor speed regulation. The frequency converter controls the speed of the motor to change the water column. Changing the frequency changes the speed of the motor and the pressure of the water pump. The different frequencies of the music are processed by the microcontroller and sent to the control end of the variable frequency motor, so that the motor speed changes with the tone, rhythm, and strength of the music, and the pressure of the water pump. With the change, the water sprayed has a high and low change, and several sets of equipment control multiple sets of nozzles. The formation of the fountain is a water pump. The rhythm and intensity of the music is converted into a control signal. This signal controls a voltage control device. After the power supply passes through this voltage control device, the output voltage also changes with the change of the music, and then the water pump motor is controlled.

2.The principle of the fountain swinging with music

The generation of radial swing is due to the establishment of a rocking mechanism under the water surface, which makes the waterscape beautiful. It is pleasing to the eye and gives people a magical feeling. It is a manifestation of the era of high-tech development.The change of the position and speed of the swinging fountain is an important factor in producing the color of the swing. The position sensor of the swinging mechanism of the fountain should be a waterproof non-contact positioning device. Usually use magnet induction Hall sensor, optical fiber guided photoelectric sensor or magnet attracted rotary position encoder. 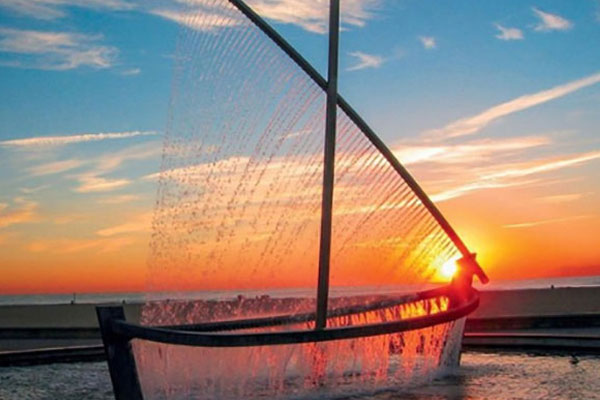 Therefore, in order to achieve the purpose of positioning. We must change its control parameters once, usually there are two control parameters to locate the motor dynamic braking. For the magnitude of the DC braking current and the starting braking time, a more convenient way to control the computer is to change the braking time.

The design of fountain equipment and technical content, the design of fountain engineering is not an easy task. Frequently seen fountains are well designed by engineers, high radiation matching height, colorful fountains, and visual perception of colors. The fountain should be distributed and artistic charm, the music fountain waterscape as the main public square, park square. Now it has advanced production of more fountains, and now musical fountains have attracted more attention.

In some of the larger square fountains, you can gradually see the fountains scattered by shining light at night, plus some spring constant changes. Add charm to the city in different ways. With the development of science and technology, fountains are now also changing, including forms and shapes. The big feature of the fountain is that it can purify the air, humidify and remove dust. Various hydraulic modes can be changed automatically. This will not only give the favored city, but also make people feel more relaxed and natural pressure. All in all, the development of fountains will continue for a long time.

There are many classifications of waterscape fountain equipment, and various fountains have appeared in social science and technology. The development speed has been widely used in the development of the construction field. Stone fountain is a major feature, genius stone as raw material, fine processing. A beautiful stone fountain sculpture, stone fountain, fountain, due to the unique material, the fountain with metal material has a more natural feeling. Beautiful, and the fountain uses fine hand-carved craftsmanship, with a number carved on the edge of the basin. A richer sense of beauty meets people's aesthetic needs.

The production process of music fountain at home and abroad is generally to select the music to be played first;Then the computer personnel used the 3D animation software to make the music fountain water type and the light changing waterscape to reflect the music emotion according to the music playback, and repeated debugging until it was deemed to be fully reflected; then the control personnel weave the control program according to the 3D music fountain animation display , To make the sprinklers, inverters, and lights move to produce an actual musical fountain, and repeatedly debug to make it basically consistent with the 3D animation simulation display.

The last three systems (music playback, animation display, control execution) conduct joint tests until the three match each other. It can be seen that there is no information integration in the whole production process, and the three production processes are coordinated manually. 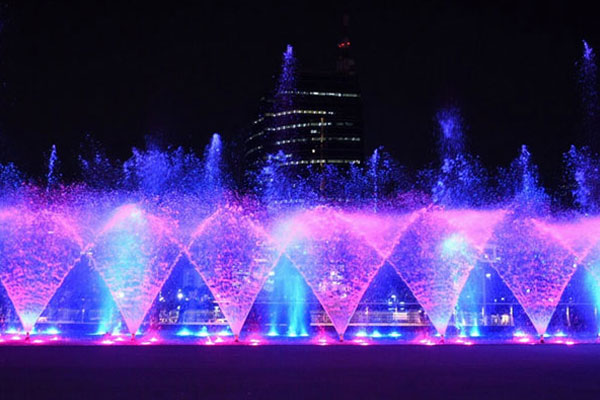