Dubai music Fountain is the world's largest Fountain and the most spectacular Fountain. 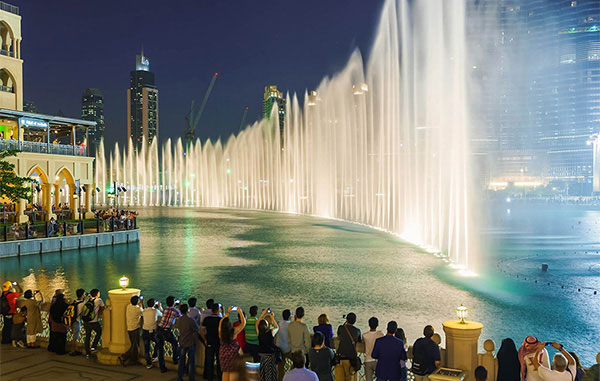 The music fountain in Dubai, designed by WET, maker of the formerly world's largest fountain in the United States, has a total investment of $218 million and is 275 meters long. The lights of Dubai's music fountain can reportedly be seen anywhere within 20 miles, making it the brightest focal point in the Middle East. The fountain squirts 22,000 gallons of water and comes with 6,600 lights and 50 color projectors. The spurt of water column has more than 1000 kinds of changes, can say to be worthy of the name is protean. Accompanied by a number of Arabic and songs from around the world, the spraying water column seems to be dancing gracefully in front of people, each using a different music, choreographed dance also different.

The music fountain performs every half-hour from 6 pm to 10 pm on weekdays, with each performance lasting up to 3-5 minutes, and on weekends from 6 pm to 11 pm and increased to once every 20 minutes after 9 pm. 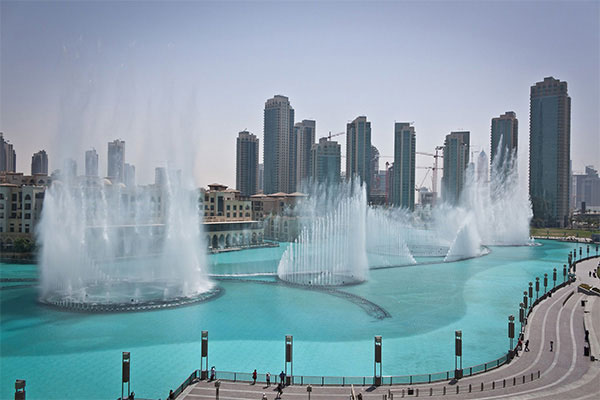 Location function: The music fountain is located on a man-made lake next to the Burj Khalifa, the original name of Burj Dubai. It sucks water from the lake into the air and eventually falls back into the lake, covering an area the size of two football fields. On more than 180 acres of artificial lake, the water column will be 150 meters high, higher than a 50-story building and the tallest fountain in the world today.

The other is introduced: The world's first total revolving building will be completed in Dubai in 2010 at an estimated cost of around $700 million.

The United Arab Emirates property developer narco waterscape has signed a contract with Beijing Zhongke waterscape technology co LTD to design and build the offshore music fountain project on the palm island of Dubai in Dubai on June 11, 2018, with a total contract value of 66 million UAE dirham ($17.97 million).

Ali Rashid Luta, chairman of Nakheel group, said at the signing ceremony [2] that the palm island of Dubai is the flagship project of Nakheel group and a famous tourist destination of Dubai. As the newest tourism and leisure facility, the offshore music fountainproject is expected to attract more tourists when completed. The project is expected to be completed in the first quarter of 2019 and covers an area of 12,000 square meters. 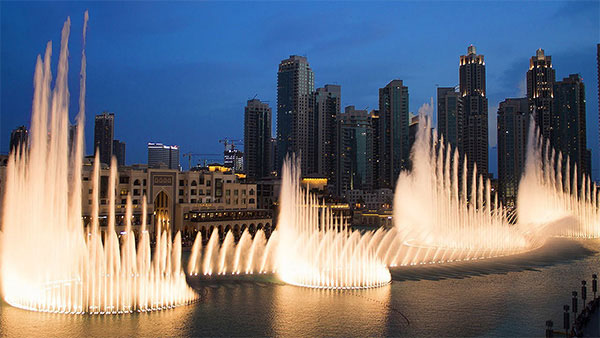 Scenic Spots: Located on a man-made lake in the heart of Dubai's shopping and next to the Burj Khalifa, Dubai's music fountain is currently the world's largest and tallest music fountain, which can be sprayed up to 150 meters, or about the height of a 50-story building.

Covering an area of 180 acres, the fountain covers the size of two football fields, with 6,600 lights and 50 color projectors. There are more than 1000 variations in the sport of water, and the fireworks effect and dancing movements are all displayed through the fountain and with music, which is quite wonderful and spectacular, which can be said to be a real kaleidoscope. 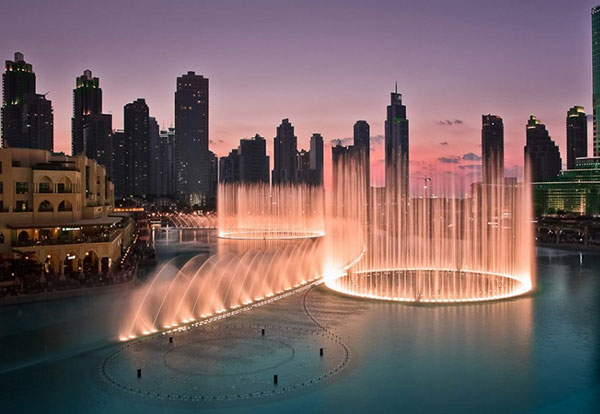 During the day as you wander around Dubai's shopping center, come to the music fountain and take pictures of nearby buildings and the Burj Khalifa. The Burj Khalifa is very tall and you want to take as many panoramic shots as you can.

At night, you can come to the artificial lake an hour and a half early to get a favorable position. If you are late, there will be a lot of people and you can't find a place close to it.

The music fountain show begins. The fountain comes out with music. The spraying water column seems to be dancing gracefully in front of people. A moment like a row of samurai uniform, high and strong; A little later spurted out all the water column magnificent, magnificent. Especially when playing Arabic music, rows of a thin water column, the rhythm sometimes happy, sometimes slow.

The music fountain show is beautiful with music, dancing, and fireworks. The music of the music fountain in Dubai is said to have Arabic and songs from around the world, with different music used and choreographed dances. However, the music fountain's performance time is shorter, if felt not satisfied, might as well watch a few more. 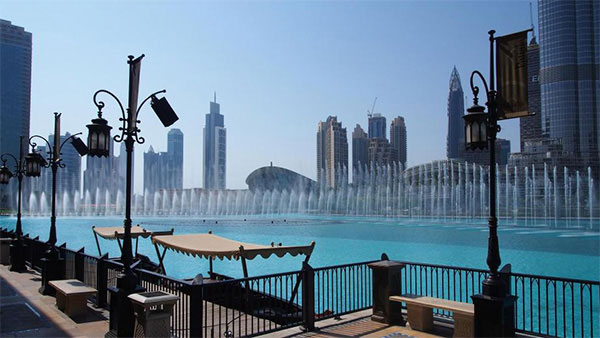 If you want to get away from the crowds and see the fountain in a different light, opt for a buffet seafood dinner at the castle palace hotel next to the fountain, or a buffet at the Armani restaurant in the heart of Dubai's shopping. This allows you to eat while watching, allowing you to experience a double enjoyment of taste buds and vision. Of course, both are a bit expensive, if you can afford it, try.

The Atlantis hotel on palm island in Dubai, the most expensive room in the 113-acre resort, costs $3,000 a night.

The Burj al Arab hotel in Dubai is the only seven-star hotel in the world. A rendering of a 100-meter-high electronic curtain wall. When it was built, the ads went as far as 1.Passers-by can see clearly from 6 kilometers away.

Dubai is building the world's tallest and most spectacular music fountain, according to the daily mail of October 15. The fountain is expected to be officially completed in 2009, with jets of water up to 150 meters high, higher than a 50-story building and up to 2 feet of water at a time.20000 gallons. 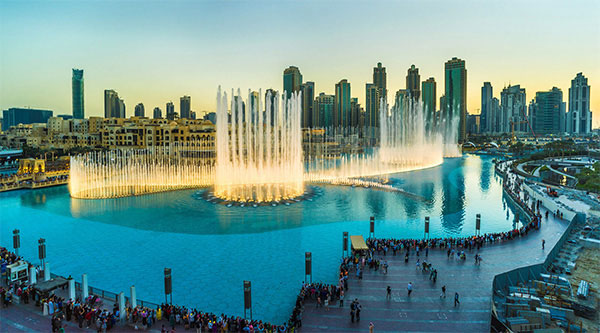 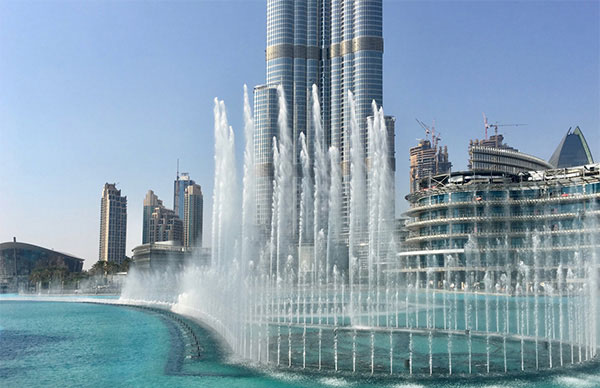 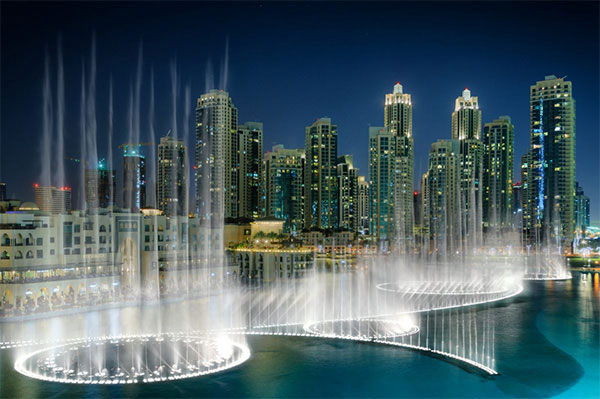