Guangdong Jieyang Music Fountain has invested more than 30 million yuan and was built in nearly half a year. It is currently the highest and longest Jiangshang music fountain in China. The design scheme of its project breaks through the traditional fountain technology at home and abroad, organically integrates landscape engineering with advanced era culture and advanced art concepts, and rich local cultural characteristics, carefully constructed and boldly innovated. The Rongjiang Music Fountain has created five "China First": First, "Highest First". The main design of the Rongjiang Music Fountain is 188 meters, which is currently the highest in China. The second is "the first floating platform area". The fountain floating platform is 290 meters long, the middle is 45 meters wide, and the upper and lower floors have a total area of ​​14,400 square meters. It is currently the world's largest floating platform. The third is "the first comprehensive technical level." The fourth is "the momentum of running spring first." The fifth is "the first Jiangxin floating platform fountain". The comprehensive large-scale waterscape performance of the Rongjiang Musical Fountain, with the theme of "water lotus", is divided into three chapters: "Lotus Daoqing", "Agitated Heaven and Earth", and "Tide and Song". 20 kinds of water types, such as "water lotus", "singing forward", "Sang Lianpin", "Yihong Range Rover", "shenlong swing tail" together with laser and music constitute a magnificent waterscape.

Luoyang Musical Fountain Lake's large-scale music fountain comprehensive water feature project has many of the world's most, including the world's longest CNC running spring (369 meters), the world's largest comprehensive water feature project (about 120,000 square meters of fountain area) The world's first high-tech water shape (variable fountain), the world's most accurate CNC positioning system (360-degree indifferent positioning CNC swing), the world's highest and longest variable frequency array. The music fountain uses peony as the main modeling element, and the straight lines and curves are harmoniously integrated. There are 569 various types of nozzles, 22116 underwater lights, 1407 special pumps for the fountain, all equipment are made by 10 professional computers through the network Polar interconnection control technology is organically combined. The music fountain will be another beautiful scenery line in Luoyang New District.

Asia's largest matrix fountain square, the largest waterscape square. Xi'an Dayan Pagoda Music Fountain Square is located at the foot of the famous Dayan Pagoda. It is 480 meters wide from east to west, 350 meters long from north to south, and covers an area of ​​252 acres. The front square is equipped with a mountain gate and a pagoda as the connection point between Yanta North Road and the axis of the square. It is composed of water fountains, cultural squares, garden landscapes, cultural corridors and tourist trade facilities. It is an important part of Xi’an Qujiang Datang Cultural Theme Area, and is composed of Datang Furong Garden, Datang Tongyifang, Qujiang New District, etc. A magnificent and magnificent Datang cultural theme area. The height difference between the north and south is 9 meters, and it is divided into 9 levels, which gradually form a form of worshiping the big goose pagoda from south to north. The construction area of ​​the whole project is about 110,000 square meters, and the total investment is about 500 million yuan. The overall concept of the square is conceptually focused on highlighting the Big Wild Goose Pagoda Ci'en Temple and the Tang culture, combining traditional and modern elements. It is not only one of the best squares in the country, but also the most important Tang culture square in the country. The music fountain is located on the central axis of the North Square. It is 350 meters long from north to south, 52 meters wide from east to west, and has a T-shaped structure. It is divided into three areas: a 100-meter waterfall pool, an eight-level drop pool, and a front-end music pool. Performance. The musical fountain is large in scale, colorful and beautiful. Among them, the eight-level fountain square array has 1024 nozzle points, and each nozzle is independently controlled by a water pump and a frequency converter. There are 22 independent water types designed for musical fountains, all of which are the latest new water types with high technological content. The large laser water curtain 60 meters wide and 20 meters high, 4 fire-breathing fire springs spewed out from the water, fully burned at a height of 6 meters at a low temperature and burst, adding to the breathtaking charm of the entire fountain. The fountain has a total of 1360 water pumps, 1124 frequency converters, more than 3300 colorful lights, and more than 2,000 nozzles. The lights of the fountain are illuminated by underwater pool floor lights, LED light strips and shore computer lights. The music adopts a high-fidelity long-range professional audio-visual system, which makes the sound, light, water and color of the fountain blend organically.

Paifang Square Musical Fountain is one of the tourist attractions in Zhaoqing City, Guangdong Province. I believe that friends who have visited Zhaoqing have seen the fountain. The old fountain was put into use in 1994. At that time, Zhaoqing ’s musical fountain was known as China ’s first. In 2010, the government spent 6 million to remodel the fountain in Qixingyan Archway Square. Almost everyone has a high appreciation for the new fountain, and even thinks it is more beautiful than fireworks. The new music fountain is a large-scale floating fountain in the lake. Its platform is 135 meters long and 10 meters wide, of which the main spray is 108 meters high! It is designed as an arc, echoing the arc of the square. There are hundreds of kinds of combined effects of music fountain water type and lighting! Its changing, dreamlike, and colorful effects are the best in Asia!

There are three music fountains in Hangzhou: Wulin Square Music Fountain, Three Park West Lake Music Fountain, Liulang Wenying Music Fountain. The best is the Three Park West Lake Musical Fountain. The West Lake Musical Fountain has nearly 400 nozzles, of which 224 can rotate 360 degrees to make more than 600 water shape changes. The largest nozzle in the middle can spray the water column to more than 60 meters high-when music is playing, in the computer The newly arranged music is processed by software to form different pulse signals. The water pump is controlled by the frequency converter to shoot out water columns of different heights and sizes; the water columns are then formed or swayed or run differently by rotating nozzles; People feel like the fountain is dancing.

The Chaozhou Musical Fountain is currently the only and largest musical fountain in eastern Guangdong. Not only is there a variety of colorful fountains that dance with music, it is also equipped with two huge display screens for visitors to watch TV entertainment programs. There are unpredictable and shocking water screen movies that will open the eyes of travelers and leave them forgotten. Water curtain film is composed of water curtain pipeline engineering, laser performance system and projector. The water screen movie is a giant fan, 12 meters long and 6 meters wide, which is formed by the spray of water sprayed from the bottom up. If you visit the site in person, you will see that water mist is sprayed around the pool. The water mist area is very large, and the camera shooting cannot be approached. The film projection forms the effect on the water mist. The best effect is between 40 and 50 meters. 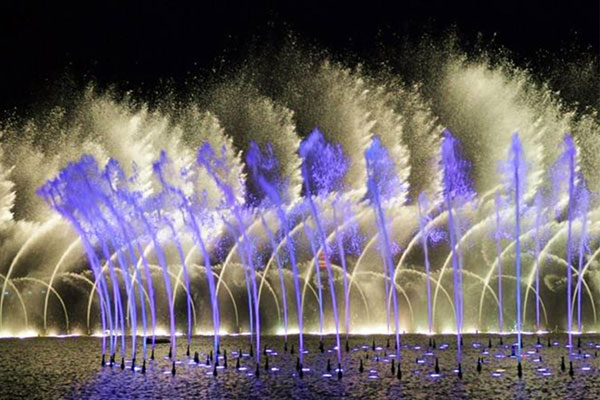 It is not easy for a builder of musical fountains to build a perfect fountain. There are many factors to consider, so today we will also briefly introduce what engineers and designers have overlooked in the process of building a musical fountain, as well as some common misunderstandings.

1.Blindly pursue the fictitious names such as "the highest spray" and "Asia first".

Generally, fountains are built in public places such as squares and parks. The wind is relatively large. The fountain is too high. When the wind blows, the pedestrians are sprinkled with water, which makes the square and the front of the store wet. Not only does it have no good effect, but it will affect the user experience.

2.The nozzle is too dense or too sparse

3.The conditions such as hydrology, address and building are not well considered.

4.The script is monotonous.

Only a few movements can be done in a day, and it has not been closed to the music beat. On the one hand, some companies have the ability of construction but not the ability of rehearsal (because this requires the recruitment of a group of artists and professional scoring software, which is not sold in the real scoring software market. All develop their own software for their own use). On the other hand, arranging actions specifically for music will charge a certain service fee, because this is also an art work, and some companies have been found to be infringing. Investors sometimes "change soups and medicines" to save some money. Of course, the effect is not as good as other places.

5.The fountain platform cannot be raised and lowered.

The fountain platform can not be raised and lowered. When the water level is low, a pile of steel pipes stands staggered there, which is extremely ugly.

The best angle to admire the fountain is -30 ° to -50 °, so that you can enjoy the plane composition and three-dimensional sense of the fountain. There is no sense of depth when you look at the shore.

7.The post-maintenance is not enough, not paying attention to the company's brand image, and focusing only on immediate interests. 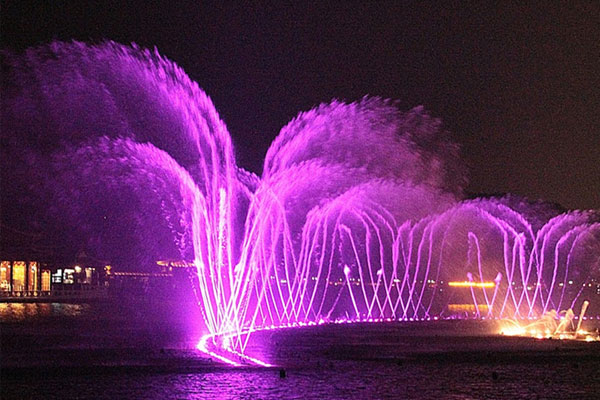