The Sea World musical fountain has a total investment of 30 million. It consists of 188 sets of super-explosive sprinklers and lasing systems. The newly built artificial lakeshore on the waterfront square in the world is arranged in an S-shape. The main body is four lotus-shaped fountains. It is also connected by a long fountain light track in series, with a total length of 168 meters, which can throw the water column to a height of 50 meters.

The 360-degree panoramic view of the Sea World Musical Fountain is full of visitors. No matter which angle of the Plaza, Minghua Wheel or Shopping Mall, visitors can walk and watch.

It was officially launched on December 20, 2013 and is free to open and free to watch.

Each game is about 10 minutes (water dance, music, lighting, fireworks are arranged differently), and the whole computer is controlled.

Find a good position, look at it, put your eyes on it, polish your eyes, and throw into this pool of water and music, lights, fireworks and staged fantasy water show! 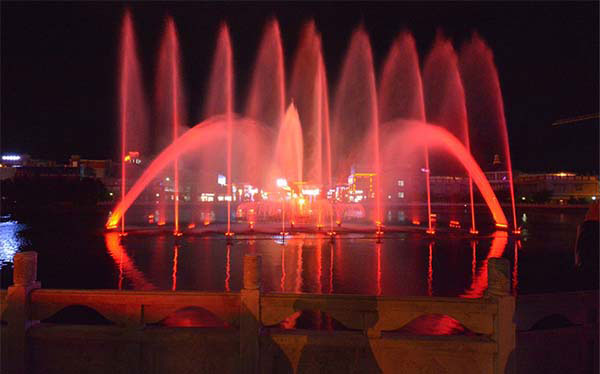 "The flat thunder is vacant, and then it seems to be endowed with spirituality, and with musical lighting and fireworks. There is no dream in the middle of nowhere. There are so many different kinds of weather, swaying and swaying, or sorghum or low, or neat or separate hair, or Xianle fluttering or group of magical dances, such as dreams are enchanting, and the dreams are shattered, the magical powers are collected, the water is sinking into the water, the songs are scattered, and everything is silent..." 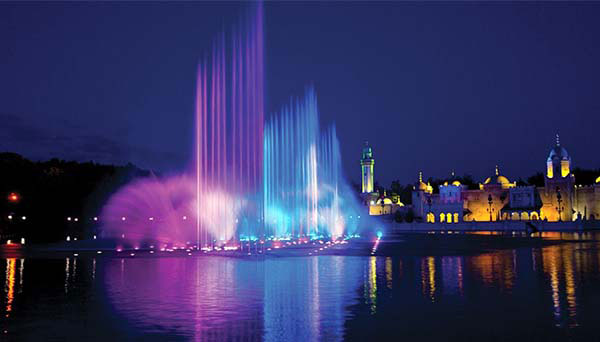 With the ups and downs of music, the water type changes with sound, light, and picture, sometimes sings and sings, sometimes it is ethereal and sometimes vacant. With precise and high-end technology, the world of the sea is as elegant and beautiful as a dance. In order to let the tourists in the square watch the water show everywhere, China Merchants Real Estate carefully arranged the water show landscape along the water bank to expand with S-shaped, changing the scenery and different scenery. Thanks to the grandeur of the fountain, the audience can not only watch at a close distance, but also feel the shock when watching it at a distance. What is even more rare is that such a splendid water show will be free of charge every Sunday to Thursday night at 19:00, 20:00 and every Friday night at 19:00, 20:00, 21:00 on time. Open to the public, highlighting the tolerance, freedom and elegance of the sea world.

Project design contractor: Beijing Zhongke Waterscape Technology Co., Ltd. It is understood that the design and implementation of the "Sea World" music fountain project by Zhongke Waterview is the winning plan for China Merchants Property Co., Ltd. in its international waterscape design competition to conduct multiple rounds of competition for multiple domestic and international programs! It is the largest and 360-degree panoramic view of the water show in Shenzhen.

The water show design is inspired by two aspects:

The first is the Pisces spirit, which mainly uses the projection of the Pisces building in the C area of the sea world in the water. Let the entity Pisces echo the illusory Pisces, and it will be true and illusory.

The second is the sea spray, which uses curves to symbolize the ship's route to the sea. The circles on both sides symbolize the giant ship riding the wind and waves at sea, causing numerous waves. 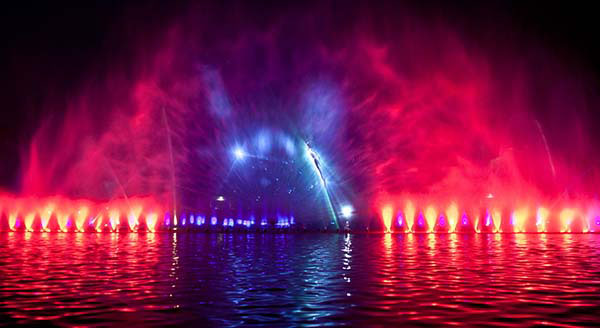 The main person in charge of Zhongke Waterview Company introduced the reporter:

The “Musical Fountain” project of the Sea World is a project for the “Water Fountain New Standard” for the water fountain industry. The most important difference compared with other music fountain projects is that the “Music Fountain” of the Sea World emphasizes the water show from beginning to end. The core of the performance is “the dance of water”, not just the shape, height and shape of the water column according to the rhythm, melody and pitch of the music. Let the "water dance" become the core of the water show, this sentence also defines the "new standard of music fountain", it will "water dance" with sound, light, fog, video and other performance elements, along with The musical theme develops a process of deducting a story and shaping an artistic image. Using the precision and high-end technology, the “Sea World” water show expresses the elegance and beauty of the dance, which arouses people's emotions of contemplation, sigh and surprise!

He also introduced to reporters the technological and artistic content behind the wonderful "water dance" performance. The "Integrated Water Dance Creation System" developed by them is a science and technology project supported by the Ministry of Science and Technology Fund. The system is the core structure of the entire music fountain. It is jointly developed by the company led by the Institute of Automation of the Chinese Academy of Sciences, the Hydraulics Laboratory of Tsinghua University, and the Tianjin Ballet. It completely solved the technical problems that the music fountain field could not be freely combined with choreography and could not be dynamically corrected in real time. At the same time, he also said that the company's self-developed equipments have national patent certificates and control systems for independently developing software copyrights and “water”. The "art dance" art creation process has reached the international advanced level. It is fully capable of representing China in the international waterscape design market competition. With these advantages, the team has repeatedly won many international waterscape design bidding competitions, and then the company's goal It is to make the "water dance" performance into a cultural industry, to become an art industry, and to participate in international competition with "China's wisdom".