1) In most cases, the Ethernet DIO and DA cards are only equivalent to the physical extension of ISA (Industry Standard Architecture) BUS digital DIO cards. These cards are only responsible for ordinary input and output, and there is no calculation function. For example, to build a running spring with 192 outputs, use three 64-bit Ethernet DIO cards, which will occupy 3 IP (Internet Protocol) addresses, only 24 bytes of data are transmitted, and it must be calculated by the host computer to give Ethernet DIO card refresh output. If a fountain needs 1024 Bit control points, 16 64-bit Ethernet DIO cards are needed. There is a time difference between the 16 IP sending data, which is not conducive to the synchronization of fountain devices.The Ethernet motion control card is equivalent to the Ethernet extension of the PC motion control card. .Every step of the two-dimensional nozzle must be directly programmed and controlled by a PC.

Obviously, this design is essentially a centralized control system, although it is convenient to debug, but the efficiency is low.Failure to give full play to the capabilities of the lower computer also caused difficulties in programming the upper computer. 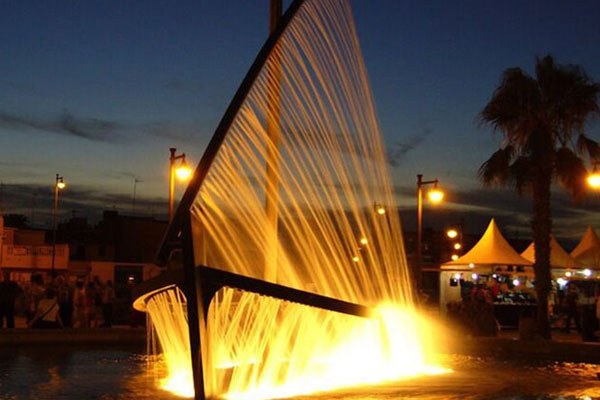 The DMX512 (Digital MultipleX-512) standard [1] was first developed by the Engineering Committee of the United States Institute for Theatre Technology (USITT) in 1986 and completed in 1990 to control lighting equipment and transmit digital data Standard. The standard protocol can control 512 dimmers, and the brightness level of each dimmer ranges from 0 to 255. The working principle of this protocol is very simple, that is, the console continuously sends brightness data to 512 dimmers. The DMX512 protocol has been widely recognized by the international industry and is currently in the dimming field of the entertainment industry. It ended the era of incompatibility between analog dimming and products, and at the same time created a new era in which digital dimming and other products are compatible with each other.

The RDM protocol [3] is a remote device management (Remote Device Management) protocol, which was formulated by the American National Standards Institute (ANSI) and is based on DMX512-A. DMX512-A can be regarded as a DMX for bidirectional data transmission. Under the RDM protocol, the control system can send requests to the lamps, the lamps can also respond to these requests, and the settings of the lamps can be changed on the console. Each RDM-compatible luminaire can be identified by its unique unique identification code; the content of the list is also likely to include the luminaire model and the number of DMX fields it requires.

3. Introduction to ACN and Art-Net standards

ACN is the standard for Architecture for Control Networks [2], which was also formulated by the American National Standards Institute (ANSI) and aims to provide advanced control network standards for data transmission of next-generation lighting control networks. ACN is going to complete more work including DMX protocol, will unify the lighting control network, allow a single network to transmit many different types of dimming and other related data, and can connect dimming equipment from different manufacturers. The ACN standard can be applied to any network that supports the TCP / IP protocol, and the most commonly used is the Ethernet network. 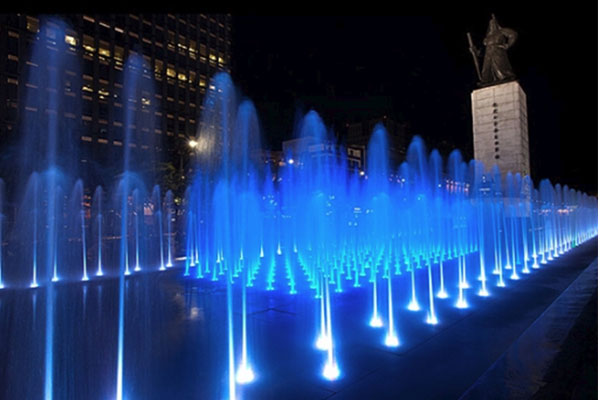 Similar to ACN, the Art-Net standard was developed by the British Artistic Company and is also a standard based on TCP / IP and Ethernet protocols. Its purpose is to use standard network technology to allow remote transmission of large amounts of DMX512 data. Both ACN and Art-Net standards support the same network compatible with devices from different manufacturers to communicate and operate with each other. The basis of both is the same TCP / IP protocol and Ethernet standard network hardware connection. Only the upper software standards are different.

Advanced multimedia network music fountain control system system,Considering the shortcomings of the existing music fountain control system, this paper proposes a more advanced control system. The new control system is compatible with the currently popular ACN (Architecture for Control Networks) [2] and Art-Net [4] control structures, and develops a series of RDM [3] / DMX512 control modules that meet the requirements of fountain control. Such as 24CH DO isolated output module, used to drive SSR equipment load, control equipment (such as lights, pumps, valves) work; 4CH DA isolated output module is used to control inverter equipment; 4CH motion control module is used to control stepper motors Motion control equipment. Since these modules not only include IO functions, but also have computing power, for example, a 192-channel running spring can be controlled by eight 24CH DO isolated output modules. In parallel computing, the host computer only needs to send two bytes of control words. Yes, therefore, with the above solution, multiple fountains such as 32, multi-pattern, multi-speed variable fountain control effect can be achieved. In addition, because the addresses of these modules are programmable, they can meet the needs of large quantities and flexible applications; for example, 4096 or 8192 RDM / DMX512 channels can be used to control a music fountain device. Every 512 channels is a domain, which can transmit 512/8 = 64 64Bit Ethernet DIO card data, and different from the Ethernet DIO card, 4096 channels are refreshed at the same time, which is very conducive to the synchronization of fountain equipment. Data of one domain 64Bit Ethernet DIO card needs to be sent in 64 times using 64 IP addresses.

Using the ACN or Art-Net network to generate RDM / DMX512 signals as described above, you can control traditional stage lighting equipment such as computer lights, laser performance machines, flame-throwing LED dimming lights in real time. Through flexible programming of the control module, it is possible to effectively control all the equipment of the fountain, effectively control multiple laser show machines, multiple projectors, etc., to meet the needs of fountain, laser, projection and even fireworks integrated performance

Due to the use of RDM / DMX512 control signals that follow international standards, the system can be self-contained and can also be docked with international large-scale stage lighting performance systems.

Multimedia network music fountain remote control scheme and control software system.The control software system matched with the multimedia network music fountain control system is generally controlled by a main control machine, and the laser, projection and other equipment are connected through the optical fiber network, so that these devices can be deployed in locations several kilometers away. Using network technology such as ACN or Art-Net, the control signal can be transmitted to several kilometers away to control the fountain equipment remotely. Of course, due to the characteristics of the control structure of ACN or Art-Net, the interface of the Internet can be expanded, and the fountain can be remotely controlled through various Internet network connections and wireless network connections.

In order to realize the remote control of the music fountain, the system configures RDM / DMX512 control modules in each fountain control cabinet to realize the water pump, water lamp, frequency converter, LED lamp, and swing positioning system, one or two-dimensional nozzle stepper motor, Local control of valve-controlled running spring and frequency-controlled running spring. At the same time, because the RDM protocol used by the system can configure parameters when debugging the device, it can also add a monitoring function for the operating parameters of the device in the control module, and send the monitoring results to the upper computer to complete the monitoring of the operating status of the device. It is a fountain system device. Provide conditions for remote diagnosis and maintenance of operating failures. 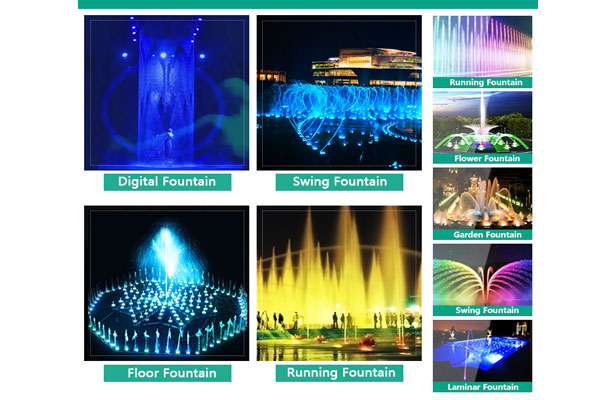