The Grand Haven musical fountain is a synchronized display of water and lights in Grand Haven, Michigan located on Dewey Hill on the north shore of the Grand River, not far from the Grand's mouth at Lake Michigan and Grand Haven State Park. Shows run nightly from Memorial Day through Labor Day. Weekend shows run during the months of May and September. Shows begin at dusk and run 25 to 30 minutes.

Many themes are used in the fountain's performances. The fountain's narration takes on personas ranging from a 12-year-old girl to a grown man. A Patriotic themed program runs each July 4 along with fireworks and, in August, a program saluting the United States Coast Guard runs yearly during the Coast Guard Festival; in 2011 a special introduction and closing song were introduced honoring the men and women of the United States Coast Guard. The special introduction and closing featured music performed by the USCG Band. Fountain viewing, not including July 4 or the festival, is estimated at around 10,000 annually. 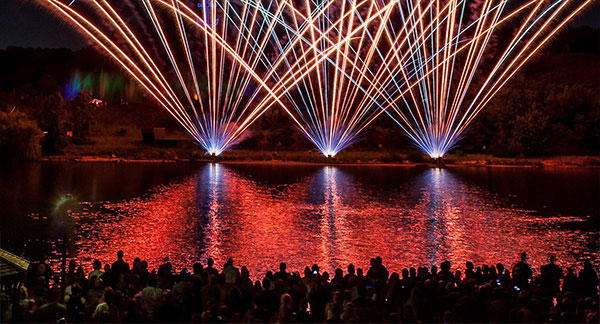 Designed by a local engineer, William Morris Booth II (who is also the patent holder), and built-in 1962 by volunteers at an estimated cost of $250,000, this fountain was based on a Przystawic musical fountainshow seen in Germany and was the largest musical fountain in the world when it was built. The display comprises a small number of water formations grouped in odd and even segments, with the same formations on each. Augmented by curtains of water at the back and front, a large fanlike array called the Peacock, and three fire hose nozzles - one placed vertically in the center, and the others aimed at an angle from each end - the show produces a simple Dancing Waters style display. Colored lights are arrayed along the front of the fountain in individually controllable groups in red, blue, amber and white, and the back curtain and Peacock sprays have their own lights - green and yellow for the back curtain, and two sets each red, blue and amber for the Peacock. In addition, nozzles called "sweeps" provide the moving effects, swaying side-to-side. A patented drive mechanism allows each pair of sweeps to follow or oppose each other in direction of movement, to move along long or short paths, and to move at any of three speeds, allowing the moving water to follow nearly any kind of music. The original show used punched paper cards, though computers control the new system. The nozzles and pumps have never been changed, only cleaned and cared for, and shows must still be programmed by hand. 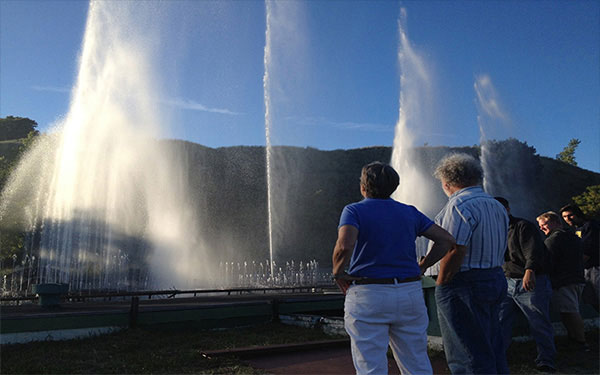 In 1980 the fountain switched from punch tape to an Allen-Bradly PLC allowing for better control over the valves and lighting. The new control system also introduced using a Radio Shack TRS 80 Model 4 to program shows. Programmers were required to type special commands into a text editor, compile the show script, and then record it out through a 300 baud modem to a four-track real-to-real tape unit. The maximum number of command that could be sent to the fountain we 12 per a second. This process took on average took over 200 hours to produce a single 20-minute performance.

In September 2006, a new PC based programming and playback system was introduced. The Grand Haven Musical Fountain Animated Choreographer was released to the public to encourage the development of new shows and allowed programmers to visually choreograph the fountain. In addition, the new playback system allowed for more complex water and lighting effects by eliminating the need for tape playback by directly controlling the Allen-Bradly PLC. New shows now typically feature over 5000 water and lighting commands in a 20 min. performance.

In 2017 the software was updated to take advantage of the new lighting and water effects and is freely downloadable.