In a city with an exploding volcano, the world’s tallest Ferris Wheel, and a hotel shaped like a pyramid, the fountains at the Bellagio have set themselves apart as the undisputed ultimate Las Vegas iconic landmark. 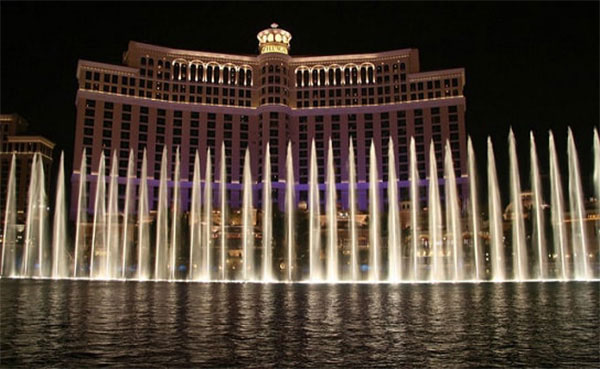 Let’s face it: whenever you see photos of Las Vegas, you’re bound to see the famous dancing waters on Lake Bellagio. An exact schedule is posted below, but basically, the fountain show runs every 1/2 hour in the afternoons and every 15 minutes at night.

Performances run 365 days a year, only shutting down when there are extreme winds.

7 PM to Midnight: Every 15 minutes

Please keep in mind that although I update this monthly, these are subject to change and that the shows will be canceled when there are high winds in the area. 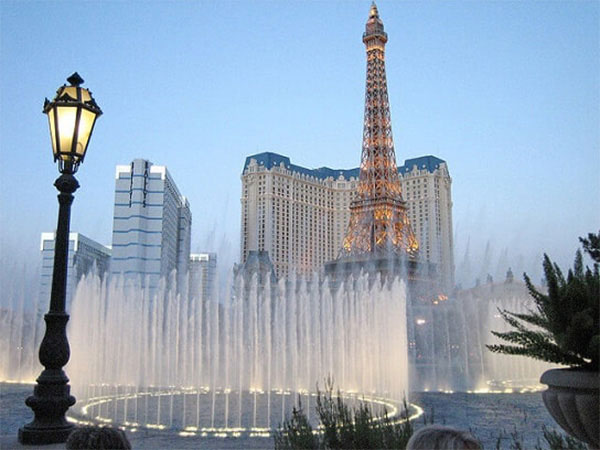 The featured show songs are on a rotating basis so that every show you see is different. At Christmas time, holiday-themed music is added. These include, “O Holy Night,” “Santa Baby,” and “The Most Wonderful Time of the Year.” Typically, however, there are around 20 to 30 songs in the rotation, including the popular (and my favorite) “Con Te Partirò, or “Time to Say Goodbye” (for those of you who don’t speak Italian), by Sarah Brightman and Andrea Bocelli. Others in the rotation include: “Uptown Funk” by Bruno Mars, “God Bless the USA,” “Billie Jean,” Elton John’s “Your Song,” and the classic “Viva Las Vegas,” by Elvis.

Other popular songs include “My Heart Will Go On” by Celine Dion, and “Fly Me to the Moon” by Frank Sinatra.

Here is the current rotation of songs, with an artist:

Singin’ in the Rain – Gene Kelly

All That Jazz – Catherine Zeta-Jones

The Ecstasy of Gold -Ennio Morricone.

Luck Be A Lady – Frank Sinatra

Rhapsody on a Theme of Paganini – Mikhail Rudy

Lucy in the Sky with Diamonds – The Beatles

In the Mood – Ralph Carmichael

My Heart Will Go On – Celine Dion

Regardless of the particular song, the fountains are breathtaking and always choreographed perfectly. It’s easy to see why there are always crowds lined up to catch all afternoon and into the night. It’s also one of the few, free, fun things to do with kids on the Las Vegas Strip. 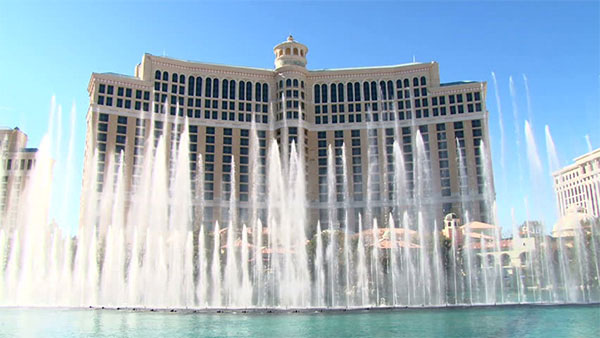 As for the best viewing spots, well, as they say, there’s not a bad spot in the house. Especially if you are staying in the hotel and have a view of the fountains. In that case, you simply turn on channel 22 on the TV to have the show music piped into your room.

As for outside views: There is plenty of room to see them on the sidewalk in front of the Strip, however, if you want the prime front and center spots, (like at the closing scene of the Ocean’s 11 remakes), you should get your spot ten minutes or so before the next performance.

There are other great viewing spots, such as a lakeside table at Spago, or during the Sunday Brunch at Lago, or at the luxury nightclub “Hyde,” but those spots will cost you a pretty penny.

Some other tidbits about the fountains:

* Opened during the resort’s grand opening in October of 1998, the fountains were originally going to have colored lights. (The lake has nearly 5,000 lights). However, according to a story in USA Today, Steve Wynn preferred the classic white look. Looking back on it, it would seem very odd to see colored lights at the Bellagio. Disneyland can pull it off with their fabulous “World of Color” show at Adventureland, but the white just seems to fit the Bellagio’s show perfectly.

* The fountains of Bellagio have been a huge hit since that 1998 opening – doing what they were intended to do: attract attention from the crowds on the Strip. Steve Wynn, however, who built the Bellagio, would later build the Wynn Hotel and Casino with the water and light show inside the resort, therefore forcing people wanting a free show to pass through gaming areas.

* The lake takes up 8 and 1/2 acres. If you were to use a standard garden hose, it would take you about a year to fill it up, according to the builders, WET Design. There are over 1,200 sprayers in all, including 16 super jets. These are the ones responsible for those incredible finales, where water explodes off the lake, shooting up to 500 feet in the air. According to the designer, the jets can shoot water up to the level of a 24 story building.